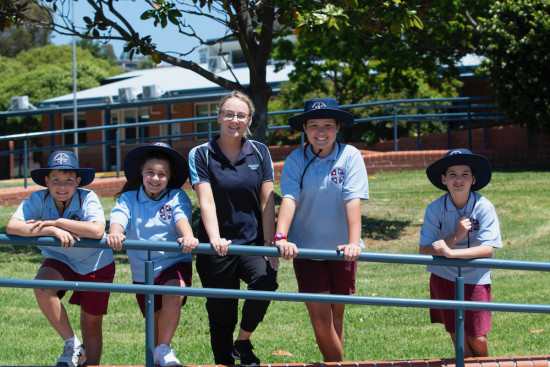 Nazareth Catholic Primary School, Shellharbour City offers a quality Catholic education for students from Kindergarten to Year 6 in Shellharbour area and surrounding suburbs of the Illawarra. We are an inclusive and welcoming two-stream school where each student is valued and respected. We strive to work in partnership with our parents to give each child the best opportunities to develop academically, spiritually and socially within a supportive, faith-filled and caring learning community.

During the mid 1990s, a large parcel of land in the newly developed area of Blackbutt and Flinders was purchased for the purpose of building a new parish church and a new Catholic primary school. The land, bordered by Glider Ave to the south and College Ave to the west, is positioned in a central location now known as Shellharbour City Centre.

The parish priest at the time, Fr Bryan Jones, and a range of people from the Wollongong Diocese coordinated the construction of the school and the new All Saints Church. The new church opened in 2012 and officially became the parish church for the newly formed All Saints Parish, following the merging of the Warilla and Shellharbour parishes. The All Saints Church and the adjacent Nazareth Catholic Primary School now present as an outstanding facility allowing for parish worship and quality education.

Sister Anne Taylor was appointed the foundation Principal of Nazareth in 1999, and initially with Jennifer Jancetic as the first staff member and Gary Quinn as the first Assistant Principal, commenced the process of establishing the school.

Nazareth was officially opened in 2000 (with the initial intake of the first Kindergarten class being housed at Stella Maris in 1999), when students commenced their education in what is now known as the Mary Ward building. From these humble beginnings, Nazareth has grown to become one of two established Catholic parish primary schools within the All Saints Parish. The final stage of construction at Nazareth was completed in 2011 with the opening of a multi-purpose hall.

Read more about What We Offer at Nazareth and Take a Virtual Tour of our school.

A Catholic School in the Diocese of Wollongong

Catholic schools have a long and proud history in the Australian educational landscape. Originally established by orders of brothers, nuns and priests in the nineteenth century, they are now almost entirely staffed and led by lay people.

Catholic systemic schools in the Diocese of Wollongong are either parish primary schools like Nazareth, or diocesan secondary or K-12 schools. They are all co-educational schools. (The Diocese also has another seven independent congregational secondary schools, some of which offer single-sex education.)

Catholic schools have a unique character because as well as being places where learning is highly valued, they are places where priority is given to a values-based education in the Catholic faith. This involves all staff and students proclaiming the Good News of Jesus Christ to the world. Staff identify strongly with their school and take pride in their work and the school’s achievements.

Take a Virtual Tour of Our School